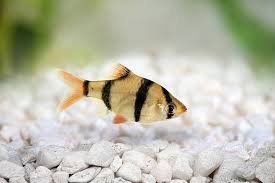 Tiger Barbs are small fish that are usually kept in the aquarium, the school with their kind, and could grow up to 2.5-3 inches in size. They are classified as semi-aggressive fish because they are nippy and could nip at the fins and tails of other fish, including their kind too. If you want to know if these fish can eat other fish, then you are in the right place because you will learn a lot more in this article.

We all know that almost every fish, especially captive breeds are omnivores and scavengers too, so they will eat anything eatable, including those that we might refer to as rubbish.

Being omnivores and scavengers too, they will eat any fish they could be able to kill, including their fry too and dead fish.

Sometimes many people do suspect Tiger Barbs to be eating their other fish in the aquarium and that is what brought about this particular question ‘ of whether tiger Barbs could eat other fish.

Well, the answer to this question is simply yes, tiger Barbs just like every other fish are scavengers and Omnivores, so they will eat anything including other dead fish and that may be the reason why you might be seeing your fish gone missing.

The fact is, fish will naturally eat up any dead animal in their tanks in order for the dead animal not to breed harmful toxins and diseases too. So, Tiger Barbs do eat other fish when they get the opportunity to.

Will Tiger Barbs Kill Each Other?

They might kill each other through their actions such as fin and tail nipping and they will eat their eggs and fry if they have the chance.

Yes, Tiger Barbs will kill each other if they have the opportunity.

When I say they could kill each other, it doesn’t mean that an adult tiger Will kill another adult, but through their actions such as fin nipping and chasing each other, which might lead to diseases and stress and might eventually cause death.

Or they will eat their eggs or their fry.

So, Tiger Barbs will kill each other either directly or indirectly.

Tiger Barbs are scavengers and will eat anything, including dead animals like fish, etc.

As I explained above, they sometimes do this to protect themselves from deadly toxins which the dead fish or any other dead animal might release in the tank which could endanger them.

Tiger Barbs and Tetras are compatible tank mates, they don’t kill each other, but they will eat each other when any of them die.

The truth is all fish are like this, whether Tetras or Barbs, etc.