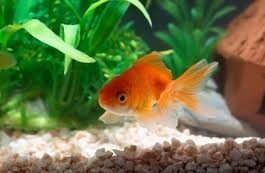 Have you wondered why goldfish eat rocks or seem to eat rocks? if you are not familiar with them and you happen to get some of them in your tank, they may freak you out with this their particular behavior of nipping at rocks. This is very strange behavior that could surprise anyone. If you are reading this article, that means you want to know why your Goldfish is behaving in such a manner, then read to the end, as I will explain everything you need to know about this attitude.

Why do Goldfish eat rocks? Goldfish don’t eat rocks, they pick up rocks with their mouth to suck any food that may be on the rocks and spit them out later.

Seeing them do this, you may be wondering how it could be possible for a small fish like the goldfish to be able to eat or swallow rocks.

Well, they don’t just pick or nip at rocks for no reason, there are a few reasons why they do that and I will explain them in this article.

1. They don’t eat rocks, rather they grab them into their mouth, suck all the foods they could feel on the rock, and then spit it out.

So, they grab rocks that have some food particles on them and not the rocks.

Although they could swallow some tiny pieces of rocks, but it’s just normal because they will excrete them and it will not affect them unless they mistakenly swallow big rocks, which is not very likely.

2. Another reason why they may seem to eat rocks is when they are about to mate.

During their mating season, you will see a male and female goldfish nipping at anything they could see, be it rocks, plants, etc.

This is just their natural behavior and you have nothing to worry about when they start behaving this way, instead see it as a sign that they are about to mate.

This is one of the reasons it is not recommended to keep tiny stones and rocks for this type of fish because they might easily swallow them if they are tiny.

Why Does My Goldfish Pick Up Rocks And Spit Them Out?

Picking up rocks and spitting them out is a normal Goldfish behavior, they do it to eat algae and leftover foods that must have rested on the rocks or they do it when they are about to mate.

Apart from Goldfish, some other fish do it too, so it is normal behavior for some fish, and you have nothing to worry about seeing yours do the same.

Goldfish can swallow rocks in the process of picking and spitting out rocks.

Although it is not very likely for them to swallow big rocks but tiny pieces of rocks.

Although swallowing tiny rocks pose no harm to them, as they will defecate them out, that’s why you can sometimes notice tiny pieces of rocks on their poop.

If they happen to swallow much bigger rocks, they will be harmed and it could even lead to their death, that’s why it is recommended to keep only bigger rocks ( any rock that is bigger than peas).